What’s In a Name?

The title irked him!

In that title was a swagger, a strutting allegiance to a story he just couldn’t teach. Couched in that title was the assumption that knowledge could be poured into his students’ brains, waiting to be regurgitated later.
The title smugly stood before him – Forces and Simple Machines.

His initial attempt to alter the title with the help of others in the staff room was quickly disrupted by the bell. It was time to introduce the science unit to his Grade 5 class, but he vowed that he would not allow that title to go unchallenged. Allegiance to a greater Story must be offered. A renaming was required. And his students should be instrumental in creating a correct title.

So they did, but only after rigorous discussion and debate.

He began the class by explaining his annoyance with the arrogant title. He introduced “story” as the inherent need of people to articulate in narrative form what life was about. As his students captured the concept, they offered thoughtful examples from their own life experiences of the tenacious tug of the Canadian Story: the passionate religion of hockey, the temporary rush of purchasing the latest fashion or required tech toy, or the disconnection of their family’s Sunday faith from the rest of the week’s activities. He offered the power of their school’s Story– the creative unfolding of the Story of God and His people living in His creation.

He wrote “presumed neutrality” on the board and, with numerous examples, pulled an understanding of its definition from the class. They began to sense that 2 + 2 = 4 couldn’t just be, couldn’t just stand alone in neutrality. The mathematical statement needed to stand in relationship to Someone who actually upheld its “two-ness” and “four-ness” together – upheld it yesterday, today and certainly tomorrow. That understanding was confirmed after they poured over Colossians 1:17. That understanding was enriched as they turned to the second chapter in Colossians and wrestled with its second and third verse.
It was now time to rename. It seemed that almost everyone agreed on the new title – Standing in Awe of God: Forces and Simple Machines.

Almost everyone agreed, but not all.

As the rest of the class poured outside for recess, a minority of one remained and shared reservations about the new title. Where was the conclusive evidence of a connection between the awesomeness of God and the forces of nature?

The student scrutinized the Scripture with quiet intensity. Then, by the gracious work of the Holy Spirit, an epiphany of biblical consciousness slowly entered his mind and heart. 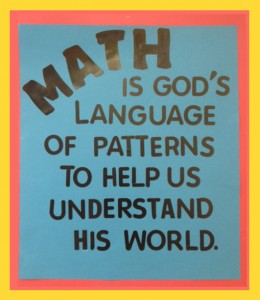 Giving credit to Whom credit is due

“This just gives me shivers!” the boy said. He insisted on renaming the title once again. His renaming would intensify the shift into a greater allegiance to the Story of God who continually upholds His creation.

He insisted that the title must be He Spreads, He Scatters, He Hurls, He Sends, He Stirs: Forces and Simple Machines.

Renaming shifts allegiance either away from God or towards God.

Included within the update on the BC Ministry of Education’s curriculum transformation is the following:

The advisory group also raised a number of issues that need consideration as curriculum decisions are made. … First Peoples: Curriculum writers need to consider the First Peoples principles of learning. The Ministry needs to ensure that First Nations ways of knowing are respected in all curriculum areas (emphasis mine)1.

The Ministry of Education’s acknowledgement of and respect for more than one way of knowing should be an encouragement to independent schools to articulate a way of knowing within their curricular unit designs with intentional renaming.

Shifting allegiance away from God:

A conquering king shifts allegiance of his important captives by giving them new names that reflect his kingdom’s values. Can you provide the Hebrew names for these Biblical characters?

Shifting Allegiance away from God

Some of God’s people are renamed to reflect a deeper relationship and stronger allegiancce towards the King. Can you provide the original name of these Biblical characters?